Ramblings from our CNC Tour

I have been wanting to report back here since we returned Wed night from the machinery open house at Stiles in High Point, North Carolina, since I know at least one or two who wanted to attend but couldn’t. Not only did I attend the event at Stiles last Wed., but in one week’s time I also managed to see demonstrations of machinery at Shopbot in Durham NC, SCM in Duluth, just outside of Atlanta, and Biesse in Charlotte. We are in the market for a new machine, and the timing of the open houses at the three big makers, plus the convenience of Shopbot being nearby, made it a rare alignment of the stars that enabled this whirlwind tour I am still recovering from.
I say recovering not just from having been away and now two weeks of quotes and jobs are expecting to get done, but also from trying to sort out the opportunities and options that seeing the various machines in action exposed me to. First the obvious, the range of sheer size, but also sophistication and technical expertise amongst the four companies is more logarithmic than liner in scale, in other words one is not twice the size of the previous but ten times. The entire Shopbot operation would fit inside the main machinery showroom of Stiles regional demonstration center.

This trip came at the perfect time in the evolution of my business. We have finally outgrown my back yard shop and have signed a lease in a newly renovated warehouse building not far away, where we will have a small showroom area and offices in the front, and enough room in the shop to set up the operation in any way we see fit. We currently process our parts on a 2004 Shopbot PRT Alpha 4×8 CNC machine, a sturdy little workhorse considering its roots and what it is made of. The fact is, we could move my little machine and keep going along the same way in the new space, but we have really out grown it. The four foot wide bed prevents us from using a lot of material that is only stocked in 5’ wide sheets, and the lack of an automatic toolchanger limits our machining options since it’s not practical to change bits manually for every sheet.

So a new machine is not simply justified, it’s a necessity if we are to continue to grow as we have been so steadily the last several years. The question, or so I thought, was whose machine to buy? I could stick with Shopbot, and have a machine that is familiar and reliable, for approximately half to two-thirds the cost of one of the other machines, or maybe it’s time to step up? Some of the machines on display at the recent AWFS in Las Vegas were hooked up to automated infeed and outfeed systems, consisting of all manner of vacuum suction devices, moving arms, and rather large conveyor systems to handle the river of parts that surges out of the end of the cutting bed after a sheet is completely machined and rendered into individual parts. I assumed such a beast was out of our league, but I figured it couldn’t hurt to see the various options are that are out there before deciding. So off we went.

I signed William, our Production Manager, and myself up for Biesse’s ‘one2one’ event on November 8, and then realized we had time to stop in at SCM, which was hosting a similar ‘Technology Days’ event not far from us on the 7th, before leaving town for the drive to Charlotte. Both SCM and Biesse hosted similar events, with classes or seminars on related topics such as duct collection, software, nesting, tooling, and such, most of which we missed due to the timing involved. But both had a range of machinery powered up and running, from edgebanders and CNC machines to sanders, molders, and various specialty machines. It’s a much different environment than at the IWF or AWFS, as there is time to focus on a single manufacturer, or even a single machine, and have any questions answered by not just the sales people but the technicians and in some cases the engineers and product specialists. At the same time it was a little frustrating for me, since the large CNC machines that I was looking at operate by themselves, with the operator isolated from the machinery by safety fencing, photo-eyes and step-sensitive matts. Being used to getting up close and personal with my machine it was kind of like being in a museum, where you can see but not touch, and being new at this level I didn’t know what questions to ask. But the sales people and others there were all quite helpful and ready to answer any questions or track down the answers, and the events seemed well attended, with dozens of attendees ranging from current owners looking to upgrade, to people curious about whether to make the plunge.

After that busy two days, we had some down time, since the Stiles event in High point was just a little farther up I-85, it didn’t seem to make sense to go up and come back twice. We arranged to stay in Greensboro, and stop in at the Shopbot world headquarters in Durham on Tuesday. I have a long history with Shopbot and the people who work there, and this is at least the third time I’ve been to their facility. Ted Hall, who created the first Shopbot in his garage to help him with his model boat building hobby, pretty much created the market for ‘entry-level’ affordable CNC tools for the average woodworker, small shops, and other mom-and-pop type outfits who can benefit from the technology but couldn’t otherwise afford the ticket price. To his credit the machines he invented are now used for just about everything, from hobbyists and guys cutting address signs and cutting boards at flea markets all the way to aircraft manufacturers and multinational companies that could easily afford a more expensive machine, and all around the world. He must be a good guy to work for, too, because just about everyone who works there has been there as long as I can remember, and I’ve been a customer of theirs for almost 15 years. Their current offering for cabinet shops, the PRS Alpha, is a nice step up from my older model, and offers a toolchanger, larger spindle, and decent sized vacuum for holding down sheet materials. If I was just looking for a stand-alone machine, or for someone considering the leap into the world of CNC, I would strongly consider this option.

A quick aside to acknowledge that while I educated myself on a lot of different machines and machinery making companies in a short time, by no means was this a complete sampling. There are at least a few other manufacturers that make machines at various points of the size and price spectrum, that I’m sure would be worth considering, but I had to draw the line somewhere. I could have made another side trip up to Onsrud while we were in North Carolina, but I figured I needed the day to catch up on actual work. CamMaster in northwest Georgia is another that comes to mind. If I were to decide on a machine in the price range of a fully loaded Shopbot, or a small SCM, I would also consider each of those, and go back for a more in-depth comparison.

At the same time one evaluates the machines, consciously or not one has to consider the companies that make them, since once you make a selection you will be totally reliant on that company, and particularly their service and parts departments, since as they all admit, all of their machines will break down eventually. It’s a myriad of boasts and claims, how many service technicians this one employs or how deep their parts inventory is, tempered with how close is your shop to the nearest regional or national location. Biesse has a cool automated system – I guess it’s cool but you can’t see the insides – the parts come out automatically to fill repair orders that come in – I guess all those engineers needed something to do in between designing new woodworking machines and whatever else they do. I thought it was interesting that salespeople at both SCM and Biesse told me their respective companies make more CNC machines annually worldwide than any other, so I took that as an indication of whether it would be better to trust my ears or my eyes.

Finally after almost a week on the road we attended the Stiles Manufacturing Symposium on Wed November 13th. From what my local dealer had told me, and from speaking with my local Stiles rep at the open bar dinner reception at the hotel the night before, I was expecting this to be a little larger than the others, and all I can say is “wow”. Not just the machines lined up in a showroom, but entire manufacturing ‘cells’, with two or three machines working in conjunction with the minimum number of humans (typically 2) to move the parts from one machine to the next in a carefully streamlined flow, all dovetailed in with raised platforms and steps so the 250 attendees could watch the action. You could tell they have the process and the presentation down after hosting this event every few months for the past several years. It was a very impressive display of manufacturing prowess coupled with a distinct message that in the long run if you have a lot of work to get done it’s less expensive and more reliable to buy machinery than it is to have to hire more people.

After the cell demonstrations and a little time to speak with the rep and dealer about the details of our potential new CNC and the options for how to handle our particular production needs, it was time to get back on the road. My head was spinning with the comparisons between the vastly different companies and the fundamentally the same machines that they engineer and manufacture. It was an incredibly worthwhile trip and came at the exact time when I have a very expensive decision to make with long-term repercussions. I can’t recommend enough for anyone seriously considering a foray into CNC or a purchase of a major piece of equipment like this to get out there and arrange a visit, or check and see when the next Stiles event is scheduled. If you let the sales department know you are interested (by talking with them during a show or just calling) you might get invited to some of these open houses. Some of them even help pay for the travel expenses.

Once back in the shop, seeing the difference between how we are processing our jobs and how much more efficient we could be in the new space, the path became completely clear. I knew exactly what had to be done…but I will have to wait to tell you in the next installment.

We are your local source for high-quality, custom designed, custom made closet and storage systems.

We design and manufacture each project to fit your needs exactly, maximizing your storage capacity and convenience. Our systems can be simple, extravagant, or anywhere in between, according to your preference. 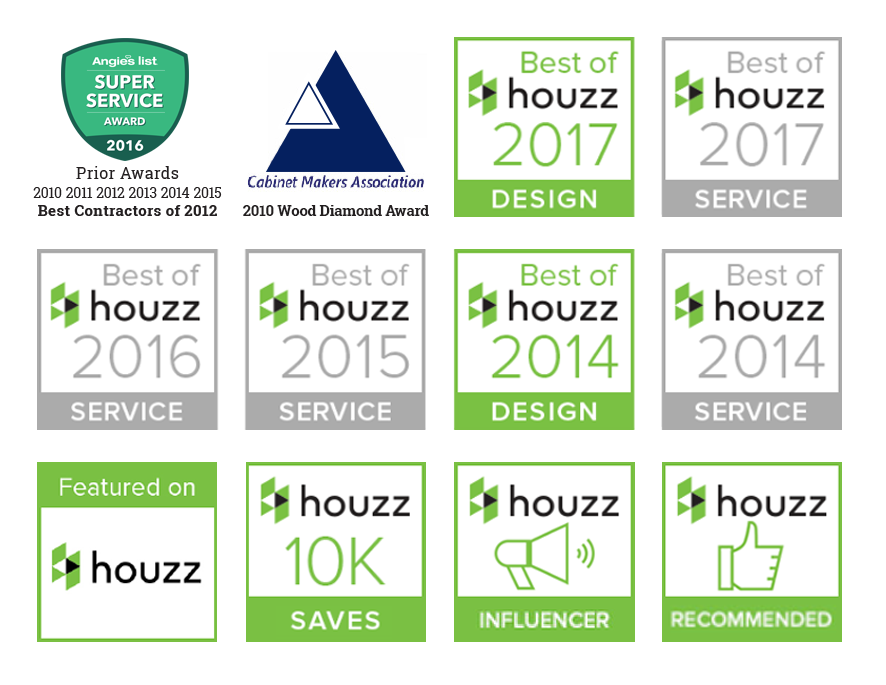